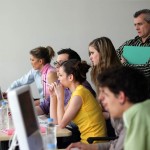 From underground Roman streets and molly houses to plague pits and secret underground tube stations, the forgotten landmarks London is steeped in history and it’s apparent everywhere you go.  But perhaps more interesting is that London is also recognised as a ‘Super City’. The UK’s capital city has been ranked as the most innovative city for the second year in a row, making it very clear that London’s immense presence on the global stage is only set to gravitate towards further success.

In 2014, London was acknowledged by major professional services company, PricewaterhouseCoopers (PwC), as the leader of 30 ‘cities of opportunity’ worldwide, and in the same year attracted more than double the amount of foreign direct investment deals than New York City.  London was then announced to be ‘technologically on top of its game’; whilst 2015 saw a wider recognition for the UK capital with its progressions in economics, infrastructural growth and environmental sustainability.

Citymapper is a free all-in-one London-centric app that covers live departure information for all possible modes of transport between two locations, with support for train (Tube and Overground), bus, and cycle hire.

Walking routes are even included if you want to take the money-saving option. Looking for a cab? Citymapper also features black cab/taxi vs mini cab price comparisons.

There are several abandoned Tube stations, many of which are used for filming or private parties, including Strand, closed in 1994; Down Street, closed in 1932; Brompton Road, closed in 1934; and Mark Lane, which is now an All Bar One but was once part of what is now Tower Hill.

You can’t get a hotel room much closer to the clouds. Popular due to its extraordinary location The Shangri-La, offers 360-degree views of London. On floors 34 to 52 of Renzo Piano’s Shard, at 1,016ft the tallest building in Western Europe, made up of 11,000 glass panels (which do not touch, allowing the building to “breathe”) with 44 lifts. It takes just 26 seconds to travel from the hotel’s 35th floor lobby, so places of interest nearby, such as Borough Market and Tate Modern, are only minutes away.

Anyone who travels frequently for work will tell you that business travel isn’t all that it’s cracked up to be. Delayed flights, traffic, jet-lag, and being stuck in an endless array of conference rooms doesn’t necessarily make for pleasant travel experiences. But travelling for work doesn’t need to be a bore and my recent business trip to New York City was the perfect example of taking advantage of travelling in a cultural metropolis for business.

Impressively cosmopolitan and almost embarrassingly handsome – the bustling city of Sydney welcomes thousands of business travellers each year from across the globe.